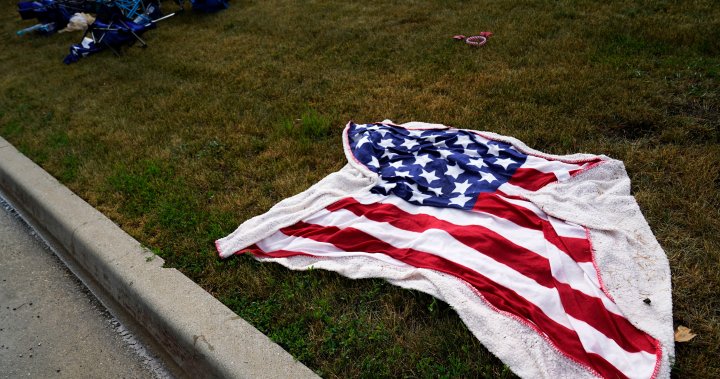 Aiden McCarthy’s photo was shared across Chicago-area social media groups in the hours after the July 4 parade shooting in Highland Park, accompanied by pleas to help identify the 2-year-old who had been found at the scene bloodied and alone and to reunite him with his family.

On Tuesday, friends and authorities confirmed that the boy’s parents, Kevin McCarthy, 37, and Irina McCarthy, 35, were among seven people killed in the tragedy.

“At two years old, Aiden is left in the unthinkable position; to grow up without his parents,” wrote Irina Colon on a GoFundMe account she created for the family and Aiden, who was reunited with his grandparents Monday evening.

Friends of the McCarthys said Irina’s parents would care for the boy going forward.

Four of other others who were killed were identified Tuesday as Katherine Goldstein, 64; Jacquelyn Sundheim, 63; Stephen Straus, 88; and Nicolas Toledo-Zaragoza, 78. Every victim was from Highland Park except for Toledo-Zaragoza, who was visiting family in the city from Morelos, Mexico.

Portraits of some of those who died began to emerge Tuesday as investigators continued to search for evidence in the shooting that killed at least seven and wounded 30.

Irina McCarthy’s childhood friend, Angela Vella, described McCarthy as fun, personable and “somewhat of a tomboy” who still liked to dress up nicely.

“She definitely had her own style, which I always admired,” Vella said in a short interview.

Straus, a Chicago financial adviser, was one of the first observers at the parade and attended it every year, his grandchildren said.

Brothers Maxwell and Tobias Straus described their grandfather as a kind and active man who loved walking, biking and attending community events.

“The way he lived life, you’d think he was still middle-aged,” Maxwell Straus said in an interview.

The two brothers recalled Sunday night dinners with their grandparents as a favorite tradition. They said they ate with him the night before he was killed.

Sundheim, meanwhile, was regaled as a lifelong congregant and “beloved” staff member at North Shore Congregation Israel, where she had worked for decades, the Reform synagogue said on its website. Sundheim taught at the synagogue’s preschool and coordinated events including bar and bat mitzvah ceremonies.

“Jacki’s work, kindness and warmth touched us all,” synagogue leaders wrote in a message on their website. “There are no words sufficient to express the depth of our grief for Jacki’s death and sympathy for her family and loved ones.”

Toledo-Zaragoza was killed on what his 23-year-old granddaughter, Xochil Toledo, said was supposed to be a “fun family day” that “turned into a horrific nightmare for us all.”

On a GoFundMe page to raise money for Toledo’s funeral expenses, Xochil Toledo said her grandfather was a “loving man, creative, adventurous and funny.”

“As a family we are broken, numb,” she said.

Toledo-Zaragoza had come to Illinois to visit his family about two months ago, according to the Chicago Sun-Times. His family wanted him to stay permanently because of injuries he had suffered after being hit by a car a couple years ago during an earlier visit to Highland Park. The newspaper reported that he was hit by three bullets Monday and died at the scene.

He wasn’t sure he wanted to attend the parade because of the large crowds and his limited mobility, which required him to use a walker, but Xochil Toledo said the family didn’t want to leave him alone.

Katherine Goldstein’s husband described her as an easygoing travel companion who was always game to visit far-flung locales.

“She didn’t complain,” Craig Goldstein told The New York Times. “She was always along for the ride.”

Goldstein was a mother of two daughters in their early 20s, Cassie and Alana. She attended the parade with her older daughter so that Cassie could reunite with friends from high school, Craig Goldstein, a hospital physician, told the newspaper.

Dr. Goldstein said his wife had recently lost her mother and had given thought to what kind of arrangements she might want when she dies.

He recalled that Katherine, an avid bird watcher, said she wanted to be cremated and to have her remains scattered in the Montrose Beach area of Chicago, where there is a bird sanctuary.